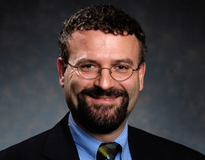 Member of the Board

Dr. Pasche is a physician scientist and board-certified oncologist specialized in the treatment of patients with solid tumors. He received his M.D. and Ph.D. degrees from the Karolinska Institute in Stockholm, Sweden and a M.D. degree from the University of Lausanne, Switzerland. Following a postdoctoral fellowship in Dr. Joseph Loscalzo’s lab at the Brigham and Women's Hospital, Harvard Medical School, he did an internship and residency in Internal Medicine at the New York Hospital, Cornell Medical Center. He received his clinical training in Hematology/Oncology at Memorial Sloan-Kettering Cancer Center and did a second postdoctoral fellowship in the lab of Dr. Joan Massagué, Howard Hughes Medical Institute and Sloan-Kettering Institute for Cancer Research.

Following his discovery of the first mutation of the type I TGF-β receptor (TGFBR1*6A), he moved to Northwestern University to become Assistant Professor of Medicine and Director of the Northwestern University Cancer Genetics Program in 2001. At Northwestern, he rose to the rank of Associate Professor in 2006. In 2008, he became Director of the Division of Hematology/Oncology of the University of Alabama at Birmingham (UAB), Professor of Medicine with tenure, Martha Ann and David L. May Chair in Cancer Research and Associate Director for Translational Research of the UAB Comprehensive Cancer Center. In 2009, he was promoted Deputy Director of the UAB Comprehensive Cancer Center.

Dr. Pasche’s most significant scientific accomplishments are: 1) Discovered the first mutation of the type I TGF-β receptor (TGFBR1), 2) Postulated that decreased TGFBR1 signaling is associated with cancer risk, 3) Developed a novel Tgfbr1 haploinsufficiency mouse model, 4) Demonstrated that constitutively decreased Tgfbr1 signaling is a potent modifier of colorectal cancer in mice and humans, 5)  Identified TGFBR1 haplotypes associated with colorectal cancer and non-small cell lung cancer risk, and 6) Pioneered the use of amplitude-modulated electromagnetic field as a novel therapeutic approach in humans.

Dr. Pasche’s work is funded by three R01 awards from the National Cancer Institute (NCI) and one award from the National Institute of Arthritis and Musculoskeletal and Skin Diseases (NIAMS). He has published more than seventy peer-reviewed articles, most of which are in high impact journals such as Journal of the American Medical Association, Nature, New England Journal of Medicine, Science, Journal of the National Cancer Institute, Journal of Clinical Oncology, Human Molecular Genetics and Cancer Research. He has been serving on several study sections of the NCI, the American Cancer Society, the American Association for Cancer Research, the Department of Defense and the Komen Foundation.

He is a Contributing Editor of the Journal of the American Medical Association and an Editor of the Journal of Experimental and Clinical Cancer Research. He is a permanent member of the Cancer Genetics (CG) study section of the National Cancer Institute and is the Chairperson of the Department of Defense colorectal cancer study section. In 2005, he received the Ohio State University Human Cancer Genetics Program Commemorative Medal. In 2007, he was elected to the American Society for Clinical Investigation (ASCI). He is listed in Castle Connolly’s Top Doctors, Marquis Who’s Who in the World, Marquis Who’s Who in America and Marquis Who’s Who in Healthcare and Medicine.

Dr. Pasche has a longstanding interest in the biological effects and clinical applications of electromagnetic fields. He has been the principal developer of Low Energy Emission Therapy (LEET), which consists in the intrabuccal administration of low intensity radiofrequency electromagnetic fields, which are amplitude-modulated at disease-specific frequencies. His research group at UAB is investigating the molecular mechanism of LEET using in vitro and animal in vivo RF exposure systems.